What we will cover

What are hop spiders?

Why would a homebrewer want a hop spider?

The best hop spiders on the market

What are hop spiders?

Sometimes known as kettle spiders, a hop spider allows you to add hops to your boil without clogging the boiling system or getting hops into the fermenter. It is a filter like that which you will commonly associate with filter coffee machines; only this is used to hold hops. There are multiple varieties in the marketplace, but they are widely associated with being “attachable” to the drum where the beer is made.

From homemade systems which use mesh bags to commercial, readily available options, a hop spider is a tool that can take your homebrewing to a different level.

You will have seen hop spiders; they are steel mesh filters attached to the side of your kettle. In general, they make adding hops easier to handle and save you from having to clean out clogs and make your brewing more productive and the process a lot easier.

Hop Spiders are great for safe, practical homebrewing and are lauded by many beginner and expert brewers alike for keeping your kettle clean.

Why would a homebrewer want a hop spider?

Cleaning hop debris from a kettle is about as appealing as cleaning the toilets after Glastonbury. But if you are serious about homebrewing, then it is just one of those things that you need to deal with. Dealing “with it” can sometimes be the thing that puts off many homebrewers and that’s where the hop spider takes the crown for the beginner and even expert home brewer.

When boiling your hops to make your brew, you can place the hops directly into the kettle. However, after sixty minutes, they will turn into a mushy pile of green goo. While not a significant problem, the process of straining can be a messy and mentally draining task. It is here where the hop spider makes things easier and cleaner. You can add hops throughout the brew directly into the spider – no more fishing out boiling hops, no more fiddling with bags or worrying about them opening in the process.

The result? You spend less time cleaning your equipment as there is only one thing to clean, the spider.

When you don’t have to concentrate on minor things like cleaning – you can focus on the larger ones. This time could be better spent developing your brewing technique and enjoying your homebrew.

When you have a hop spider, you can remove doubts and worries about the removal of hops, missing any solids or having to check the fermenter for any impurities regularly. Your time is spent doing the things that make a great brew instead, and you get to experiment with different temperatures, times, and mixes to make it worth your while.

There is no higher satisfaction for a homebrewer in sitting down and enjoying the fruits of your labor. Using a hop spider can leave you with more time to take a seat and throw back a couple of your new ultimate New England IPA.

We will leave the final word with a longtime homebrewer, PortLargo based in Florida who said this about his hop spider:

My Hop Spider is a critical piece of brewing equipment. Compared to direct pitch (and real clogging problems) it’s probably a touch less effective, but easy enough to do a good job. In addition to the good advice posted elsewhere, I regularly give my hops multiple stirs during the boil. The idea is for maximum contact with the wort. If you whirlpool hops, you really want to circulate that wort with a pump or lots of stirring.

Downsides to hop spider use

Of course, there are downsides in any equipment that you use, and the spider hop is not immune to criticism or issues.

The biggest drawback for a lot of hop spider users is that they can experience a change in the aroma and taste because of something called hop utilization. This is even more of an issue if you’re using a small filter or bag in your hop spider.

Hop utilization, measured in ‘International Bittering Units (IBUs),’ essentially defines the bitterness of a beer. Hops contain a horde of chemicals, but there are three you need to care about which are alpha acids, beta acids, and essential oils.utilization. This is even more of an issue if you’re using a small filter or bag in your hop spider.

These are what give the beer it’s bitter flavor and prevents the growth of any unwanted bacteria. Fundamentally, they promote wort fermentation. A beer’s IBUs, determined by the iso-alpha acid content in parts per million, is made when alpha-acids transform into iso-alpha acids which give your beer bitterness. If you thought you could leave science in high school, then homebrewing is going to provide you with a re-introduction, brewing is, after all, science!

Beta acids also add bitterness, but they are essential in extending shelf life. Here, beta acids oxidize during fermentation – effectively changing the composition. This can lead to a negative effect on the end flavor, which is why you need to keep a watchful eye on Beta acids.

Essential oils give your beer their aroma and ultimately are more volatile than alpha and beta acids, meaning that they will evaporate during the brewing process. Some recipes will ask you to add hops towards the end of your boil or even at flameout to keep your essential oils balanced and in check.

So how can a hop spider affect hop utilization?

The answer is simple. Hops define the bitterness of your beer, so you want to make sure that they are used in your brew to full effect. A hop spider’s potential to dampen your hops effect is a significant concern for many homebrewers.

Can you better increase hop utilization with a hop spider?

The good news is, you can. You will need to take a few key steps in doing so, but these will become essential weapons in your homebrewing arsenal.

Again, for the final word, we turn to a longtime homebrewer by the name of Ian based in Illinois who’s own experience with a hop spider is negative.

I used a hop spider for a number of batches, but ultimately gave it up and have gone to just throwing the pellets right into the boiling wort. My unconfirmed perception is that I was losing something with the spider. I don’t have any clogging issues putting pellets in loose and whirlpooling, but I do use a pump to push the wart through a plate chiller and into the fermenter

Overall, the decision to use a hop spider is a personal one. Knowing what kind of brewing you are going to be doing is going to be the most significant determining factor for you.

What are the best hop spiders to buy?

So, have we convinced you on buying/trying a hop spider? Would you like to know what all the fuss is?

We have researched far and wide to select three of the best hop spiders you can buy on the internet today. We think that these are the hop spiders that you need to buy.

Regarded as an excellent device for the first time brewer and with an average rating of 4.2 out of 5 this Ohio Stainless Steel Hop Spider is a great choice. One key advantage is the adjustability of the handles, allowing your hopper not to touch the bottom of the kettle.

Suitable for up to 300 grams of hops and made entirely from stainless steel, the manufacturers claim:
“it will capture 99 per cent of the hop material while still allowing the hops to move in the kettle to help enable a good hop efficiency.” 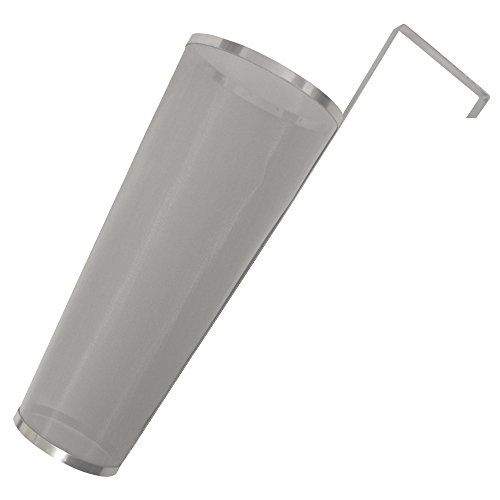 positioning itself as a hop spider which “is easy to use and even easier to clean” this G.Francis Hop Spider gets a reassuring 4.7 out of 5 in 92 customer reviews on Amazon. As with all hop spiders available on the market place, the key is the ease of use and the applied versatility. From tea and coffee brewing to ease of storage, this Hop Spider has received many positive accolades as a simple solution to home brewing requirements.

I thought it would filter leaf hops pretty wall but was skeptical about using pellet hops, which is all I use. It did a fantastic job, used all pellet hops in a brew; it looked like all of it was still in the basket when I was done. My beer looked clear pumping out from the plate chiller. When I was done the pot was virtually clean, no crud in the bottom and no hop mess stuck to the sides. I literally just had to rinse it out. I flushed the plate chiller, clean water coming out after a couple of seconds of clear beer. No clogs during the cool-down process and no crud coming out when I flushed the chiller. Worked perfectly.

Brewing 6x14in Hopper Spider Strainer
$23.99
Two hook handles firmly secure this filter over the edge of your kettle and, during the boil, hops can be poured directly into the spider 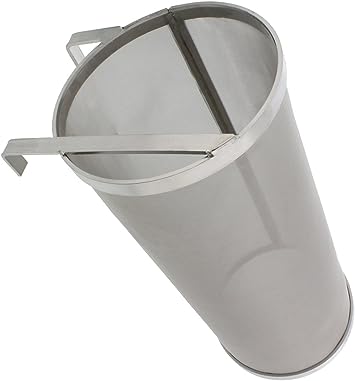