How many pints in a keg? let’s Find Out!

Beer, glorious beer! We all absolutely love it and dream of a world with an endless supply.

Alas, in the real world, it’s all about quantities and stock. Whether it’s stocking a home bar or preparing for an event, it’s almost inevitable that you’ll be working kegs. But exactly how many pints of beer do kegs hold?

Put your pint glass down for a moment. Here’s all you need to know about how many pints are in a keg.

Different sizes and types of keg

While it would be easy to assume that all kegs are the same, that couldn’t be further from the truth. In fact, there are several types of keg available, all of which hold individual volumes of beer. There are six main types of keg available on the market, all of which are ideal for storing beer for long periods without compromising on the consistency, flavour, or carbonation.

I do not doubt that you and your mates would have a good go at emptying a keg of any size, but here’s how much they can hold to start with. Learn how many pints are in a keg, and also how many variations of keg there are!

Beer Socks
$9.99
Simply kick your shoes off and put up your feet up to display the succinct message to everyone around you. A perfect gift for craft beer aficionados, homebrewers, bartenders, or any beer-loving friend in your life - and who doesn’t love be 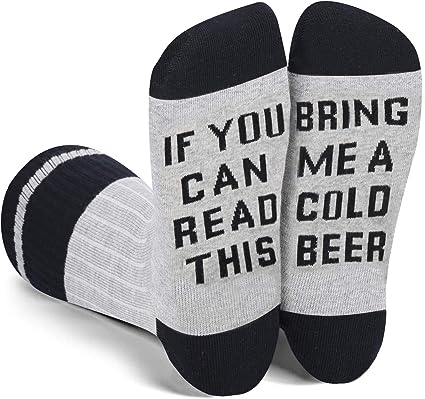 The ability to hold a colossal 58.67 litres worth of beer underlines its sheer size. With this in mind, users usually choose this for beers that they know they love rather than new tipples. There’s nothing worse than being left with 15-and-a-half gallons of a beer that doesn’t taste right.

Bars and restaurants regularly choose this option as they require changing less often and sit snugly inside a standard kegerator. However, home users wanting to stock their summerhouse or garage bar will find that this offers value for money due to the increased volume of beer being purchased.

The ability to hold a colossal 58.67 litres worth of beer underlines its sheer size. With this in mind, users usually choose this for beers that they know they love rather than new tipples. There’s nothing worse than being left with 15-and-a-half gallons of a beer that doesn’t taste right.

Bars and restaurants regularly choose this option as they require changing less often and sit snugly inside a standard kegerator. However, home users wanting to stock their summerhouse or garage bar will find that this offers value for money due to the increased volume of beer being purchased.

A Quarter Barrel Keg holds the same volume of beer (7.75 gallons or 992 ounces) as the Slim Quarter Keg variant. However, at 13 7/8” tall, it is far shorter. This is compensated by a 16 1/8” diameter, which is why it also gains the nickname Stubby Quarter.

This makes it perfect for parties and events, as well as home bars. However, only a few commercial bars will use it due to the space it requires without matching the volume of the biggest kegs out there. Tapping it is a very easy task too, which is another reason it’s so ideal for personal use.

The Quarter Barrel Keg will be easily disposed of once finished too. While it’s hardly a priority before getting smashed, it’ll certainly be a blessing when completing the clear up with a stonking hangover. Do not forget it.

At 5.16 gallons (661 oz), the Sixth Barrel Keg is one of the smaller options on the market. This makes it ideal for home usage, especially when trying to create new homebrews. You may have also heard them being referred to as Sixtel Kegs.

The 23 3/8” height and 9 1/4” diameter create a tall, slim design. They can be used for dual-tap kegerators, allowing home users as well as commercial bar owners to offer a greater range of beers.  This can be a key selling point when the cabinet space is limited.

Sixth Barrel Kegs offer 19.55 litres worth of beer, which is more than enough without leading to massive waste if a particular brew turns out to be unpopular. However, if you’re set on a specific brew, you may wish to go a little bigger.

Often shortened in name to the Corny Keg, the Cornelius Keg is a tall, cylindrical model that was originally designed to store and dispense soft drinks like Coca-Cola and Sprite. Don’t worry, though; there’s nothing childish about the 5 gallons (or 640 oz) unit.

The Cornelius Keg’s tall, sleek design is popular with homebrewers as it won’t take up too much floor space. Unlike the other kegs, which use valves, they operate using a ball lock system, although some older versions still opt for the pin lock alternative, and stand 23” high with a diameter of just 9”.

Better still, they are particularly easy to clean, making maintenance a particularly easy task regardless of how often the user is likely to go through the 5-gallon volume of beer. Whether you’re a lazy bloke or not, this is a great way to enjoy your beer on draft.

As the name suggests, the 50 Litre Keg is a keg that holds 50 litres of beer. Predominantly used in Europe, it is closest in size to the Half Barrel Keg. Its volume equates to 13.2 gallons or 1,690 oz, which takes the full weight up to a whopping 130lbs.

Popular European beers such as Heineken and Stella Artois are often imported in this size. The keg carries a circular design with a 16.06” diameter while it stands 20.94” high. When full, the keg will get quite heavy and may need special treatment or two people to carry.

Like most options, the kegs are very robust. They are popular for home usage as well as in bars and pubs of various sizes. Whether you know it as the Import Keg, European Barrel, or 50 Litre Keg, there’s no doubt that it is a very popular option.

USA Drinking Team T Shirt
$14.95 - $17.95
Proudly printed in the United States (not China). Bring jobs back to America and wear your American-printed tee with pride 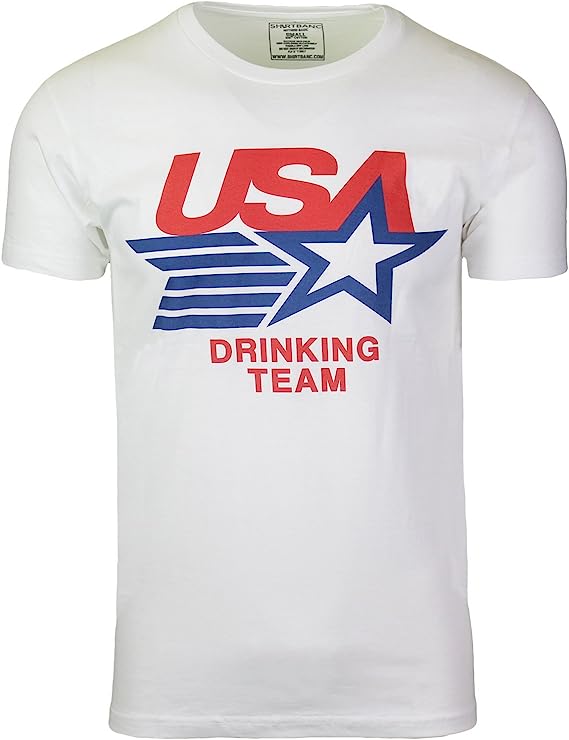 How many glasses of beer in a keg?

The number of glasses that can be filled from a keg will depend on which type is selected. Naturally, the Cornelius Keg doesn’t come close to Half Barrel Keg. While understanding the gallon and litre values is a good starting point, analysing the number of glasses is a far more suitable metric.

Of course, this also depends on how big the glasses you want to use are. If the glass is to replicate the size of an average can or bottle, at 12 oz, the various keg sizes provide the following results.

With a beer, however, you may opt for the half pint glass. These measures are naturally 50% of a full pint. When opting for an American half pint, the drink will be 8oz (half of 16oz) while the British measure is a masculine 10oz (half of 20oz).

In this case, the new values read as follows:

Pints in a keg

However, if you’re a manly beer drinker (I can hear the grrr from here), you’ll probably stick to full pints. Again the fact that the American pint glass is 4 ounces smaller than the British pint does make a big impact. While the difference on an individual pint might not seem significant, it soon adds up when dealing with a full keg.

Naturally, you simply half the values of the half pints, to calculate the new figures;

So, what have we learnt from all this? Well, to start with we now know how many pints are in a keg, that there are several types of kegs available, and the choice you make can have a telling impact on the amount of beer that can be stored at home or in the bar.