Kings Cup is a drinking game that has been around for many years and has numerous variations. Some may know it simply as Kings, Circle of Death, Ring of Fire or something else entirely.

Nobody is truly sure where this game was invented. Played globally, from the university halls of the UK to the Frat Houses of America, the adaptability of the rules have made kings cup popular all around the world.

The reason for Kings Cup being so popular is its incredibly easy set-up, its ability to involve as few or as many players as desired and the fact you can add your own rules. Of course, the added fun of drinking a few beers also helps!

The equipment needed for Kings Cup is incredibly straight forward. All you need is:

The Great American Craft Beer Deck features 53 Original Card Faces Each with a Different Craft Brewery Logo. From all around the United States, these are genuine American entrepreneurs. Their passion is dedicated to the innovative full-flavored beers that they make. 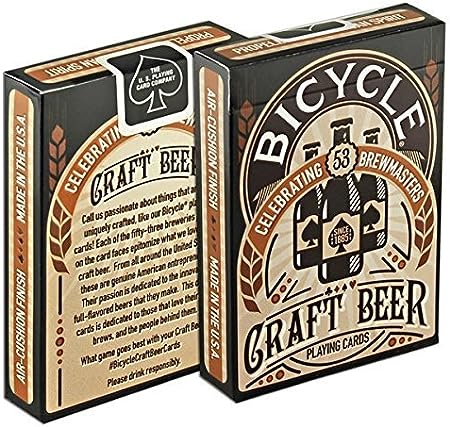 Perfect for themed drink parties and sharing among friends, this massively over sized cocktail glasses hold a large amount of your favorite margarita, beer, wine, champagne, or martini. Made of premium, hand blown glass, these make an excellent birthday, holiday or gag gift for any drink lover in your life. 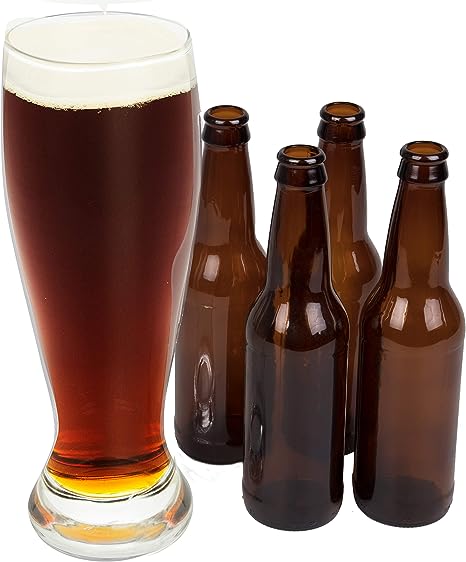 To set up the game, shuffle the deck of cards and deal them in a circle around your cup or glass (this is the Kings Cup).

Each player takes it in turn to draw a card and follows the instruction related to the card. What each card requires from the player that draws it depends on what rules you are following – We will give examples later on in this article, but feel free to make up your own if you think they will go down well with your party!

If you think it will help everyone present, you can decide on the rules ahead of time, write them on the paper and stick them to the wall – This is particularly useful for new players to begin with, as well as every other player once a few drinks have been consumed!

Each player takes it, in turn, to draw a card and perform whatever task the card signifies. Play then proceeds clockwise or anti-clockwise, with play finishing either when the last card is drawn or when the contents of the Kings Cup is consumed, whichever you decide.

The beauty of Kings Cup is that while the basis of the game is the same whatever version you play, the rules can be adapted, changed and modified to suit your group. Variants to the game set-up could include using two decks of cards or adding two cups, using a mixture of alcohol or even adding dares that are not related to drinking.

Below we have included some of more the general instructions related to each card. Feel free to mix and match these as you like, or as we already mentioned, invent your own! 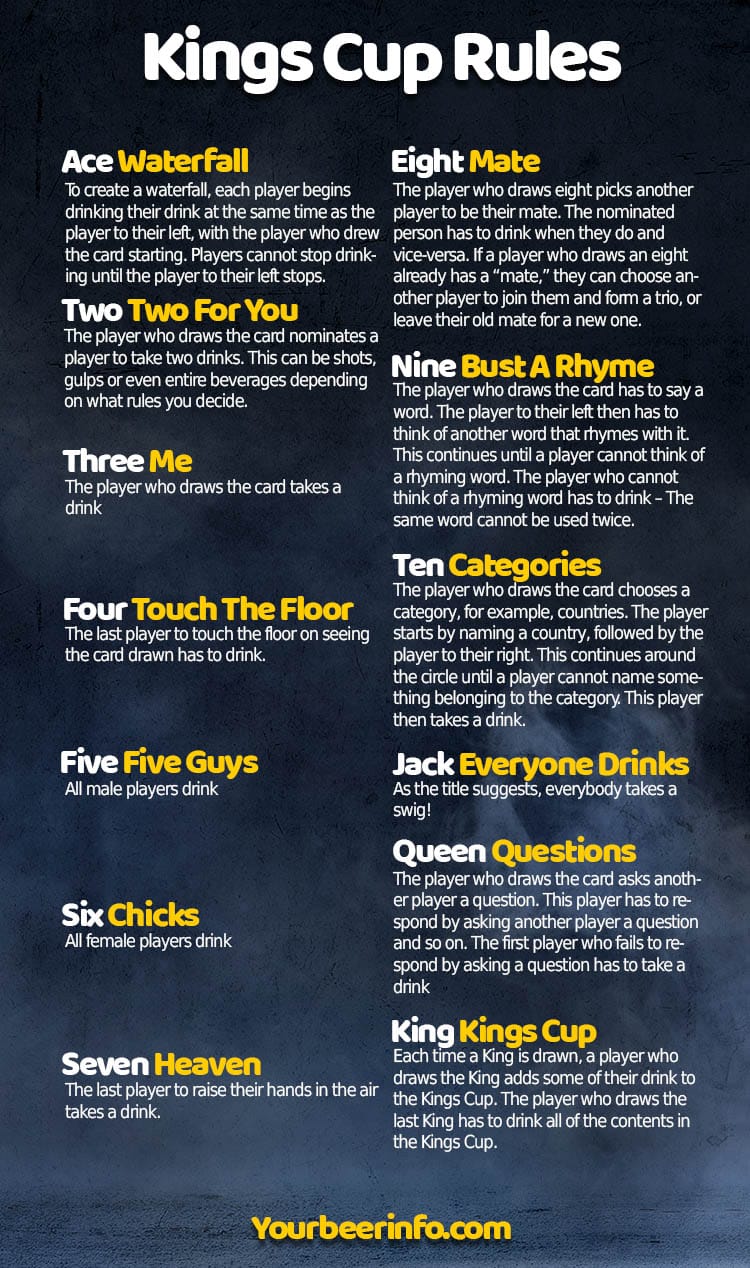 Safe: Every player takes a drink except for the player who draws the card.

Two for you: The player who draws the card nominates a player to take two drinks. This can be shots, gulps or even entire beverages depending on what rules you decide.

Two: Similar to the above, except the player who draws the card picks two players to take a drink.

Who? A round of spin the bottle is played. The bottle can either be used to point at which player drinks, or if you are keen to include challenges that are not just related to drinking, you can also use this to give the player a dare.

Me: The player who draws the card takes a drink

Three for me: The player who draws the card takes three drinks.

We’re whores: Each player has to take off an item of clothing. The last player to do so has to take a drink. Whether the clothes stay off or not is up to the house rules!

Draw one more: The player has to pick another card

My Life: The player who draws the card has to take a drink from every player’s drink.

Heaven: The last player to raise their hands in the air takes a drink.

Close to heaven: Do a body shot out of another player’s bellybutton. This can be decided either by it always being the player to the left of the person who draws the card, or they can be picked via spin the bottle.

This card can be particularly evil, as the player who draws a card can force the player to their left to drink by picking a word that does not really have many if any, rhyming words. For example, “orange” has no rhyming words.

Your chance to shine: The player who draws this card has to perform 20 press-ups, sit-ups, squats or similar. If they do not manage to complete them, they have to take a number of drinks equal to the number of reps they could not finish. For example, if they only manage 12 press-ups, they take eight drinks.

Categories: The player who draws the card chooses a category, for example, countries. The player starts by naming a country, followed by the player to their right. This continues around the circle until a player cannot name something belonging to the category. This player then takes a drink.

Draw again: The player who draws the ten has to draw another card.

Minister of foreign affairs: The player who draws this card is the only player allowed to talk to people not playing the game, including messaging on a cell. Any player caught breaking this rule by the Minister of Foreign Affairs has to drink.

The Jack entertains: The player who draws the card has to entertain the crowd. This can be in a variety of ways, but one variant is telling a joke. Every player that laughs has to drink.

Mix it up: Each player has to put their drink in the middle (not in the Kings Cup). The player who drew the card then reassigns players drinks to everyone in the game.

To the Queen: Each player has to raise their glass and say “to the Queen.” The last player to toast the queen has to drink.

Rewind time: The player who draws the card can ask the previous player to perform their task again.

As already mentioned, there are no limits to what you can have as rules and instructions when it comes to Kings Cup. There are even ways you can mix up some of the rules, for example:

Card colors or suits: You can have more than one rule per card color or suit. For example, a red three could be “fight me,” whereas a black three could be “me.” If you want to go even further than this, you can have a different rule for each card. Be careful though; this game can be challenging enough to keep up with (which inevitably leads to drinking!) and any rules you implement you will have to follow too!

Jokers are not traditionally used in Kings Cup. However, this does not mean that you cannot include them. As there are fewer jokers than other cards, it would be wise to apply a particularly challenging instruction to these cards such as:

Down the Kings Cup

Refill your drink and down it.

There are other possibilities too, let your imagination flow!

Give Kings Cup A Go!

Kings Cup is a game with a diverse set of rules depending on where people have played it, so we would recommend establishing rules before each game. This will help you and everyone else who is playing, as it will ensure everybody spends more time drinking and less time learning! Kings Cup is a lot of fun and can be as straightforward or as difficult as you decide to make it. To add extra fun to the game, you could even contact each player ahead of time and ask them to submit some instructions for a chosen card, so nobody knows entirely what to expect.

Give Kings Cup a go; it’s a great way to add more fun to the already sociable activity of drinking beer! If you like drinking games then make sure to check out our asshole game rules guide.